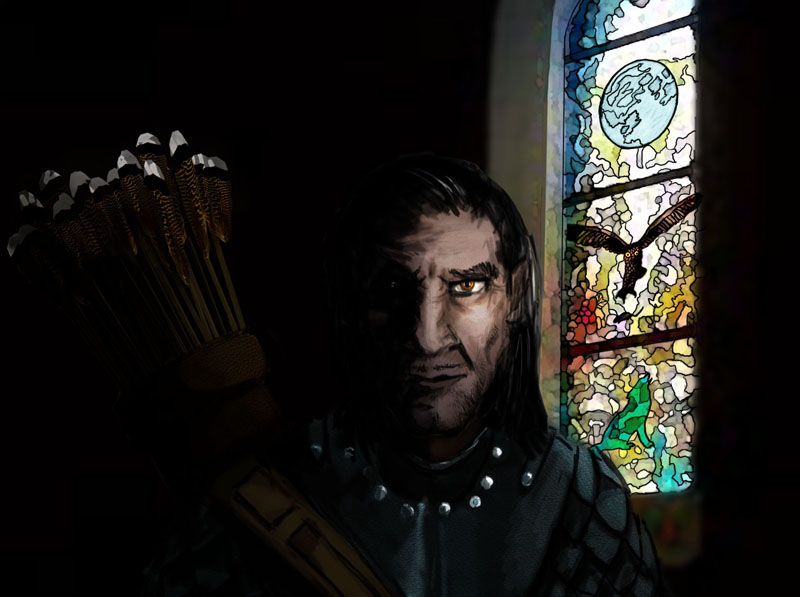 Tengil was designed to be a character on an Ultima Online player-owned roleplaying server called Requiem.

This was done in Photoshop. The armor design is based on one I found online, the character's face is from various sources such as Vincent Price and a few other men of varying degrees of beauty. Luckily, he came to resemble none of them. The stained glass window portrays some of his character traits and motivations.

The lavishly decorated figure in front of Luke would have made poor prey indeed. He fancied it would have screamed like a pig.

"Citizen of the Venerated Republic."

"You stand before the grand and wise Magistrate Gleiss, representative of our grand Venerated Republic. You have arrived at this part of the interview process due to passing the appropriate health screenings, and because of the abilities you claim to possess. State your name, birthplace, age and profession, and as to why the benevolent Republic should expend its resources and time in allowing one such as you to attend to the Republic's interests within the old colonies."

"Magistrate. I am Luke Tengil, born in Niunas fourty years ago... the outpost no longer exists... I hunt." Luke watched the flacid man supress a yawn. "Like most hunters, I can provide food, skins, and other supplies for the colony and should the need arise, protect it from the inhospitable wildlife."

Skinning fuzzy little animals was the last thing on his mind, but no matter. He doubted his real reasons would have gone down very well.

In the main hall of Tor's grandest cathedral, a leathery-looking man seemed to meditate. He was unarmed, but every now and then, the arrows in his quiver shivered, whispering as the feathers brushed against each other. Had he been a wolf, his ears and fur would have been gnawed, but his teeth would have been sharp and his senses keen. His light leather armor, scaled to allow full movement did little to disguise the strength of his body. His hair, glistening with some sort of unscented oil, hung in his eyes where he sat, leaning forward in deep contemplation, staring through the ground in front of his well-worn boots.

Luke Tengil was in a cathedral, but he was no believer. It was merely a convenient, quiet, dark place to think clearly.

Luke had a strange sort of respect for the Resolve. For all the misery and difficulties it had imposed upon his life, it had initiated something he had long dreamt of - a culling of the weak. The petty little children, leaching life from their feeble mothers, protected by mindless men trapped in their daily, drudging routines. The Torment had put an end to it. Routine had been replaced by a sharper need - the need to survive. Who had time to worry if this dress matched those shoes or if Martha was caught sleeping with the neighbour's cousin's son? Who cared how much the fish was as long as it was cheap enough to eat? Whose daddy is richer? It didn't matter much now. He had stumbled over so many orphaned that perhaps "Who has a daddy?" became more relevant. Now it was life or death. Or undeath, like the screaming undead scourge testified.

It was rare that he felt a twinge of pity - he had worked that poison out of his mind several decades ago, and yet he fancied that he could sympathize with even the prey. You needed to think like the prey to find the prey, after all... Where would it run, where would it hide? What did it eat, what did it lust for?

Lust was a funny thing. If a living thing found something desirable enough, it would forget all else and concentrate only on having it... Luke Tengil had long ago abandoned his foolish desires. Money, what would it do? He had heard of even the richest noble families becoming ravaged with the Torment. Faith? The Decus helped those who helped themselves. Love? Love was passing, and worse still, limiting. It trapped and blinded. Sex.. Well. Sex was overrated. One moment of pure pleasure, passing and leaving a strange sensation of dissatisfaction and hollowness in its wake. No, the only thing Luke desired was power, and not the power of nobility or the popular. There was a tremendous power in the lands that ruled even the rulers - the power of fear. With fear came respect, submission, utter hopelessness... But it had its weakness too. If someone determined this source of fear, they would seek to destroy it, and so he had no respect for the imbecilic tyrant or bully. Even the Resolvists had gone about it wrong - they had exposed themselves and so made themselves a prime target. He thought of their thousands of blind, mindless followers slaughtered as soon as the Resolve had exposed its true purpose. Their time would come as soon as they weakened, and all living things weakened. No, true power was something intangible, something that could rule from the shadows and not be stopped. It was something that would not fall from the death of one man or one desire.

He knew he could not find what he wanted here in the bloated, tremendous city of Tor, no more than he had in his home of Niunas or any of the territories he had slipped through before or after the Torment. But Tor offered one thing that lead to the path of his desire - an opportunity to let himself loose on new lands. He would do as he had so many times seen his prey do, he would gnaw himself free from the festering remains of the old lands and bound freely into the cleaner, more easily influenced New Dardain where he could weave his influence however he pleased, if all went well.

Luke rose slowly and his arrows whispered amongst themselves again. A soft creak from the bench was all that the cathedral offered in farewell as he slipped out the grand doors towards the docks.